Alexander's Masamune Devil Trigger is blue and red with most of the body physique bare with a reptilian appearance, his arms and legs having a reptile-looking appearance to them albeit similar to that of a dragon rather then those of the common reptile. A pair of dark horns sprout from the back of his head and curve forward to the sides of his face. His head is covered by a red 'hood' that extends over his face to cover his right eyes while keeping the left eye exposed. Attached to his left arm is a clawed appendange with the appearance of a full segmented "sheath" that holds Masamune and can adjust position to allow him to draw or sheath it quicker while leaving his other hand free to wield the blade or other weapons. His right arm also becomes altered. He gains a deeper, echoing voice and his eyes turn a glowing yellow. The "coat" that covers his body with tails divided into four segments that are actually a paired of curled up semi-chiropteran wings.

Alexander's Gun Devil Trigger is very reptilian and has a reptile-looking appearance to Dante's arms and legs, his head seems to produce spiky edges, cracks on his chest that glow with yellow energy, and his wings s 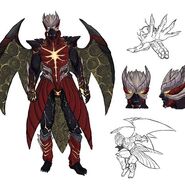 Add a photo to this gallery
Retrieved from "https://devil-may-cry-fanon.fandom.com/wiki/Alexander%27s_Transformations?oldid=4921"
Community content is available under CC-BY-SA unless otherwise noted.